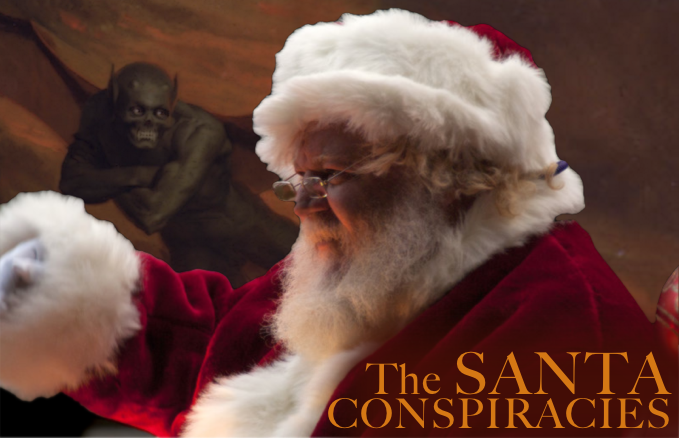 He represents the most profitable annual holiday, and embodies the spirit of togetherness, good will, and giving at Christmas. While belief in the jolly old saint has diminished in recent years, he, like some forsaken lord of the nether realm whose shadow spreads far enough to cast a darkness over all the land, has returned, and captured American consumerism in his icy grip.

The roots of one of the most dangerous conspiracies of our time stares us in the eye, and much like the NSA, he makes lists, checks them twice, and spies if he has to, whether we’re naughty or nice. But while the NSA can “enter” your home through your computers and mobile devices, they don’t come down your chimney once a year like HE does. This week, we examine the Santa Conspiracy, and the way that the red-clad (communist?) immortal from the North lends himself to everything from secularism in America, to becoming poster-child for spy agencies, the abortion industry, public drunkenness, repairs having to be made aboard the ISS, the scourge of racism, military psy-ops and misappropriation of taxpayer dollars, and much more.

Upon listening to this week’s edition of Middle Theory, you may think twice before you leave cookies and milk waiting on the nightstand this Christmas Eve…

Also discussed this week: Insurance shoppers granted Christmas extensions with continuing Obamacare problems, and new studies that show how alcohol can boost your immune system. Drink  DAD JUICE to your health this Christmas… but remember, all things in moderation.

Thanks to Daniel Bonfiglio and Graham Stanton for sponsoring the show with donations this week. Become a sponsor, and become a member of The World’s Most Secret Society by donating to Middle Theory today.