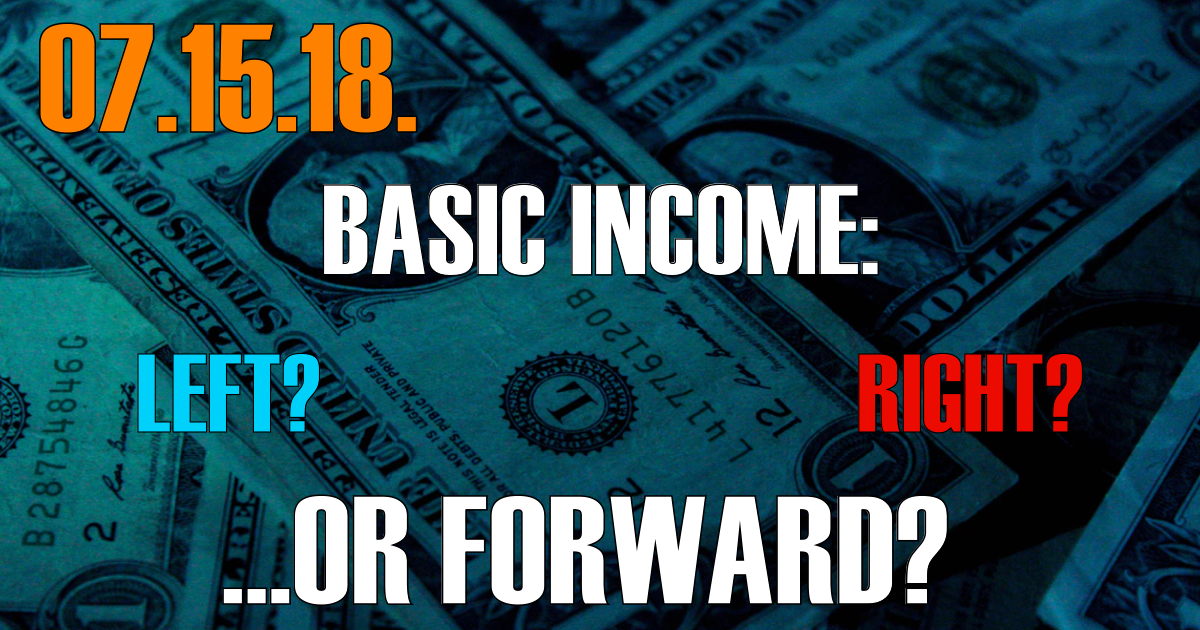 On this episode, we look at the concept of Universal Basic Income and explore what would be required for such a system to succeed in changing society in beneficial ways.

From the outset, we begin by looking at a few historical instances where great minds–specifically Greek philosopher Plato and folk singer Bob Dylan–express the merits of centrism in their personal philosophies. This leads us to some discussion about the general volatility in media today, and the way commentators tend to favor attacking one another over finding common ground or coming to any real sense of understanding of opposing views. Micah recounts a recent personal experience along these lines, which leads to some musing on the difference between when a person misspeaks, and when there is intentional deception when applying falsehoods about another individual.

This brings us back to Ana Kasparian, who we recently discussed on the program. After her emotionally-driven attack of YouTuber and former colleague Dave Rubin, we showcase a decidedly more objective presentation she recently gave on psychologist Jordan Peterson, in relation to his views on hot topics like “enforced monogamy” and equality of outcome. We also examine how Peterson’s own views have changed somewhat in recent months, as a result of his interactions and debates on a national level. We argue, primarily, that common ground can be found between opposing views, and that reasonable, objective discourse can occur, and would, in fact, be more beneficial to current political dialogues than divisiveness, which is often steered by unsound or deceptive arguments.

Then later in the program, we turn our focus to the discussion of universal basic income, a controversial idea where all Americans would receive a certain amount of income on a monthly basis. While some argue against the idea of giving all Americans “something for nothing”, there are many merits that such a system might bring to society, not least of which involves the ability for low-income earners to be able to make ends meet, without having to work multiple jobs or sacrifice simple comforts. The bigger question, however, is whether such a system could ever be implemented effectively? We examine the good and the bad, judging whether it could even be instated in America at all without extreme measures the likes of constitutional amendments.

Then in the wrap-up, we speak with an experienced professional cave diver named Kera, who explains some of the technical details about the recent Thai soccer team that was rescued from a flooded cave system. Finally, we also examine why Elon Musk has found himself in a contentious online exchange with some of the Navy divers who were involved in the rescue.