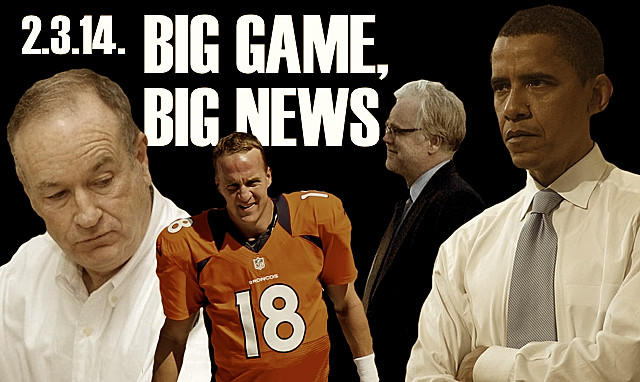 An unprecedented day for news coincided with this year’s match between the Seattle Seahawks and the Denver Broncos, where President Obama gave one of the most interesting interviews of his presidency with Fox News commentator Bill O’Reilly. Meanwhile, family, friends, and admirers mourn the loss of actor Philip Seymour Hoffman, who died from a presumed drug overdose in his New York apartment.

We’ll also examine the weird story of a man who was arrested in a plot to slay George W. Bush, in addition to beginning a relationship with his daughter, along with that of a man who claims he drifted in the Pacific for 13 months. Meanwhile, Dylan Farrow launches an eloquent attack against her presumed predator of yesteryear, Woody Allen, and Allen’s spokesperson fires back, promising Allen himself will respond soon.

Finally, comedian Mark Dice plays a trick on students at a California college, asking them to sign a petition to have gun owners executed in concentration camps. Were they even listening to what he was saying?

Consider helping us out with a donation if you like the content you hear each week on Middle Theory. You can also leave us some positive feedback on iTunes, follow us on Twitter, or just send us an email… we appreciate everyone’s support, as always. 🙂