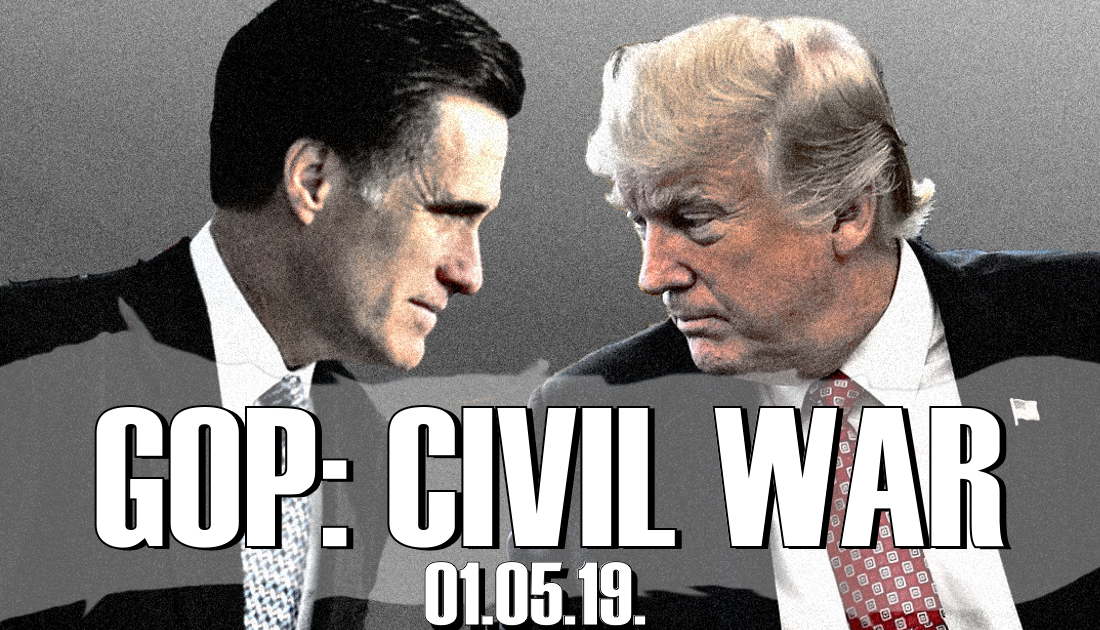 On this first edition of Middle Theory for 2019, a rift is growing in the GOP, with vocal opposition to Donald Trump following an op-ed by newly elected Utah Senator Mitt Romney.

Happy New Year, first of all… and as we look at what’s happening in the news, Micah begins with some discussion of holiday reading, and what we consider “higher literature” by today’s standards. Does the writing of novelist Stephen King, who many call our era’s American “master storyteller”, qualify? Edgar Allan Poe, whose literature is widely praised today, was once seen as bordering the obscene… which reminds us of how cultural trends and attitudes change with time: political parties flip-flop, styles, and trends come and go, and the call for Nietzchian “historical philosophy” becomes all-the-more necessary.

Then getting to news, shock-jock conservative radio host Michael Savage was recently the target of death threats, by an obviously troubled individual who cited his “racism” as one reason just before using racist expressions in reference to Savage himself. Extremism is never justifiable, in our view; turning our attention to other similar news, we ask our listeners what they think about the exposure of a lawyer with former ties to a neo-Nazi organization… by the Southern Poverty Law Center, who allegedly obtained information as proof illegally. While we don’t doubt their good intentions, past situations like those involving Maajid Nawaz, who was wrongly labeled an “anti-Muslim extremist” by the SPLC (despite being a Muslim himself) call their actions into question. What do we do, in other words, when the people who fight extremism become extremists themselves?

Our big story this week has to do with an op-ed that appeared in the Washington Post last week by newly elected Senator, former Massachusetts Governor and once GOP Presidential Candidate Mitt Romney, who offered his critique of Donald Trump just prior to being sworn into his new Senate seat. It isn’t the first time Romney has gone after Trump, and while many Republicans have decried Romney’s attack, with references to “virtue signaling” and even allusions to “Civil War” within the GOP, a few commentators on both the right and left are asking why more people won’t speak up against Trump. Is party loyalty more important than truth and honesty?