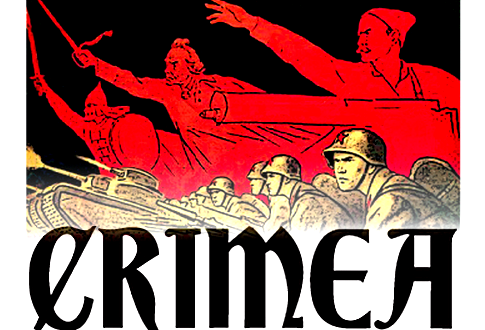 It’s something members of The World’s Most Secret Society had been conversing about for months… and with the present violence that had erupted around the Euroamaiden protest movement in the Ukraine, the ongoing crisis in Crimea takes center stage on this week’s edition of Middle Theory.

One week after Yanukovych was ousted from power, the Ukraine may be on the verge of war with Russia, as the Big Red Bear demands surrender of Crimean forces. The officiall deadline for surrender was 10pm EST on March 3, and during the live program on Monday night, McNonymous and the Mouth examined news as it happened, with vague reports concerning activity in the early morning hours afoot in Crimea. U.S. response to Russia’s actions had been condemning, with warnings of sanctions and even suspension of Russia’s G8 membership.

And on Wall Street, the Dow drops 100 points in regard to Ukraine fears, while conservative pundits ask whether Sarah Palin and Mitt Romney “predicted” the rise of Russian aggression that may spearhead a new Cold War… or not.

With all this heavy-talk, it’s good to grace Der Gople with a few “Lolololols of the Week”: A Father who won an $80,000 agism lawsuit later had the court rescind the order, after his daughter was caught bragging about the victory on Facebook. Meanwhile, would you eat the products of this Biotech/Sausage startup, set to begin growing celebrity tissue samples for use in meat for custom charcuterie? Here at Middle Theory, the M & M say not just no, but hell no, you goddam cannibals.

Like Middle Theory? Considering making a donation to the cause, and keep The Mouth and McNonymous on the airwaves.