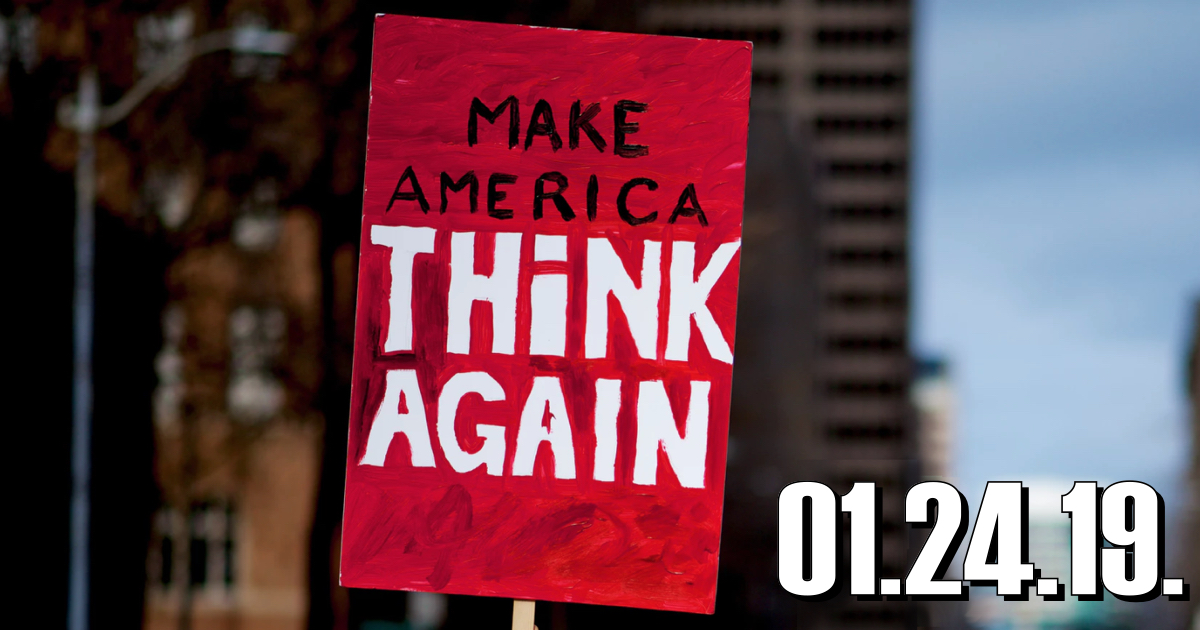 This week after fact-checking media coverage of contentious events in Washington, we are joined by Michael J. Thompson, co-editor of the book Anti-Science and the Assault on Democracy.

A Note to Our Listeners: The majority of this program was recorded on January 24, with an addendum in our weekly “wrap up” section to allow coverage of breaking news about a temporary end to the longest government shutdown in U.S. history. Hence, early portions of this episode will reflect coverage of the ongoing shutdown, which as of January 25, 2019, has reportedly been lifted for a period of three weeks.

In addition to news about the government shutdown, including the baffling fact that partisanship in Washington seemed to prevent the passing of a House Resolution that would fund the U.S. Coast Guard, we turn our attention toward fact-checking a variety of news outlets; particularly in relation to coverage of a viral video depicting an interaction between students at a Catholic high school and a Native American activist in Washington. The affair is revealed to have been an unfortunate combination of media biases, unreliable reporting without a complete investigation, and even elements of systemic racism that complicated an already troubling situation. In our investigation, even popular fact-checking sites like Snopes appear to have contributed to misleading information, in an attempt to get the facts straight; we attempt to negotiate the entire affair on nonpartisan terms, while making observations that have largely been left out of coverage by media sources.

Then later in the program, we are joined by Michael J. Thompson, a professor of political theory in the Department of Political Science at William Paterson University. His areas of focus are in theories of justice, critical theory, Marxism, German Idealism, moral philosophy and the history of political thought, and his forthcoming books include The Specter of Babel: Toward a Reconstruction of Political Judgment (SUNY Press) and Twilight of the Self: The Eclipse of Autonomy in Modern Society (Stanford University Press). He is also the founding editor of Logos: A Journal of Modern Society and Culture.

In the introduction to his co-edited anthology, Anti-Science and the Assault on Democracy: Defending Reason in a Free Society

, the editors write: “It is our contention that tendencies that defend anti-science views in the name of “democratic pluralism”—whether invoked by the Left or the Right—are actually destructive of a broader culture and the mind-set appropriate for a democratic society. Rather than enhancing the capacity for rational debate and critical discourse, we could see this as a return to premodern forms of subservience to authority and a deeply entrenched irrational refusal to submit beliefs to rational scrutiny. In this respect, we believe that we are witnessing a peculiarly new manifestation of anti-science belief systems that are, in spirit, akin to a premodern worldview but carry new consequences in contemporary society and politics.”

As an Amazon Associate, Micah Hanks earns from qualifying purchases.